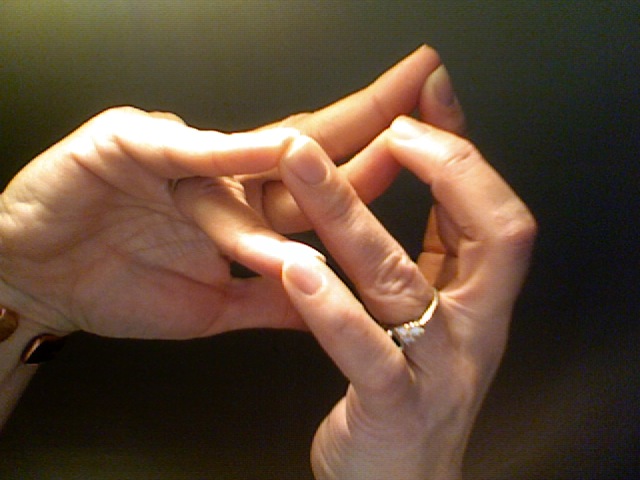 Surabhi mudra is also called Dhenu mudra. As per Indian system,
dhenu means cow. It symbolises virtue (Satvikata) and excellence.
The other meaning of surabhi, as per dictionary, is Kamadhenu (the
special cow) which gives desired boons. Similarly, with Surabhi
mudra a person acquires the desired power. While making Surabhi
mudra, fingers take the shape of udders of a cow. Milk is obtained
from the udders of cow, which gives strength to the body. Similarly,
the Surabhi mudra makes the body balanced and strong. According to
Ayurveda, by maintaining balance between wind (vata), bile (pitta)
and phlegm (kuff), body remains healthy. Imbalance is the source of
diseases. Surabhi mudra balances the wind, bile and phlegm. It makes
the body healthy. The body of man is physical, it is atomic. Proper
combination of atomic energy makes the body strong. Improper
combination weakens the body Balance of all the five elements in
body results in health, otherwise problems arise. Fingers of the
hand represent all the five elements. The balanced order of five
elements in the body leads to development. Surabhi mudra strikes
balance in all the five elements.

Utkatasana is best suited for Surabhi mudra. If there is a
difficulty in this asana, this mudra may be practiced in Vajrasana
or Sukhasana. Method of Utkatasana The pose of sitting straight on
soles of the feet known as Utkatasana.

To start with, practice it for 8 minutes. After practicing it for a
week, increase the duration to 16 minutes. Finally this mudra may be
practiced up to 48 minutes duration. If it is not possible to do it
at a stretch, the duration of 48 minutes may be divided into three
sittings.

In Surabhi mudra air element meets the sky element and
earth element meets the water element but fire element (thumb)
remains free. The union of air and sky elements stabilizes the
Brahmand Chakra. Like Brahmand Chakra, the navel chakra of the body
also becomes healthy and steady. Creative power is developed by the
union of water and earth of the chakras. In Surabhi mudra several
forms are developed with the union of five elements. This has varied
results. Methods and results of these are described separately.

The little finger represents water element. In Surabhi mudra the thumb is placed at the base of little finger, which starts alleviating bilious problems and diseases. It helps in making kidneys healthy and it rectifies urinary disorders. It is useful for persons with bilious temperament.

The ring finger symbolises earth element. By placing the thumb at the base of ring finger, Surabhi mudra is accomplished. The Earth mudra alleviates diseases related to abdomen. It keeps the digestive system in order. The Earth mudra makes the body powerful. It removes inertia and heaviness.

The middle finger is representative of sky element. This is also called Shunya mudra. Characteristics of emptiness and sound are attributed to sky. This mudra leads to coordination of sounds. The inner sky gets rid of noise. An atmosphere of tranquility is
created. Sound of ‘naad’ appears. The feeling of ‘Anaahad naad’ is easily reached through this mudra.

In Surabhi mudra when fire element is joined with the ring finger of air element, the development of air element begins. It removes various gastric disorders. These gastric disorders are not revealed by medical examinations. A person starts feeling serenity immediately with the use of Vayu mudra. It increases the steadiness of mind. It is especially useful for those engaged in meditation and worship.

Surabhi mudra should be used only after considering all aspects. If
only gastric disorder is there, the five elements can be made to
touch the base of air-element finger, which pacifies gastric
disorders.Self practitioner must keep in mind his body temperaments.
For persons with phlegm temperament the fire element pacifies the
phlegm, but it also reduces the water element. It is therefore
suggested to use this mudra for a shorter duration.

It is a multi-dimensional mudra. As such it has some opposing
results. The fire element mudra is useful for pacifying gas. But
simultaneously it increases heat also.